Industrial Photovoltaic can be divided into several types:

In this type of installation, all the energy produced is sold to the electricity distribution company or the free market and is recorded with a separate electricity meter. The company offers turn-key supply and installation of grid-connected photovoltaic systems as well as real-time remote monitoring systems and power management to the grid from a PC, tablet or smartphone.

Construction of photovoltaic installations for own consumption with a bidirectional electricity meter and buy up of surplus energy: 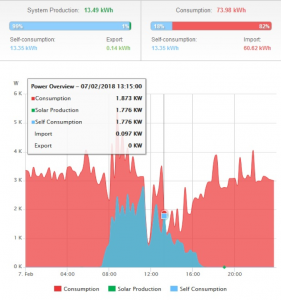 On the graph at that point the total consumption of all consumers in the site is 1873 W, the energy produced by the photovoltaic plant is 1776 W, the energy used is from the net is 97 W.

Grid-connected Accumulating photovoltaic installations for 24 hours solar power and UPS function – when there power blackout of the grid:

In this type of grid connected systems, when the available photovoltaic energy is more than the consumption of all consumers, the surplus is stored in a Li ion battery. Excess energy can also be used to heat domestic hot water with priority. When the consumption becomes greater than the energy produced by the photovoltaic system, the stored energy in the battery is first used, and when it is insufficient, then the shortage of the network can be used. In this way, accumulated energy during the day is also used at night and the use of solar energy is possible 24 hours a day. With proper sizing of the system, it is possible to almost completely meet the energy needs of the photovoltaic system. This type of system can also offer a back-up power failure function (UPS feature).

Autonomous photovoltaic installations do not require a grid to operate. This type of installation can be used to power remote objects, production, buildings, security, video surveillance, lighting, vans. The produced solar energy through photovoltaic panels is stored in batteries and can then be used either as a DC power supply or to use an off grid inverter to convert the voltage to a 230 V phase or a 380 V phase.

Typically, this type of installation is used where there is no grid or other power source, but also energy from the grid can be used.

In some areas, wind power can make a significant contribution to total energy production. Wind power is available in the evenings and can dominate in the winter or in cloudy and foggy weather, that is, when it is smaller than the photovoltaic, so that the two types of energy are complementary. Typically, these systems work with a battery.

Upgrading existing photovoltaic installations with addition of accumulating and UPS function
If you already have a grid-connected photovoltaic installation for your own consumption, regardless of the brand of the inverters used so far, it can be upgraded with additional devices so that the surplus of photovoltaic energy is stored in an accumulator and then used with priority before it is consumed by the grid. It can also be supplemented with a back-up function (UPS function) when the power supply is dropped.